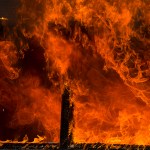 A machine shed was reported destroyed Tuesday night in a fire in southwestern Freeborn County.  The Freeborn County Sheriff’s Office received a call of the fire at 6:42 p.m. Tuesday at 12825 625th Ave., Emmons.  When deputies arrived, the shed, which had formerly been used as a hog barn, was reportedly fully engulfed in flames […]