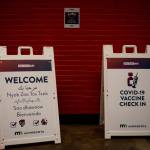 About 10 percent of Minnesota residents have now received at least the first dose of a COVID-19 vaccine. The state reached that milestone in Sunday’s update from Minnesota Department of Health, reflecting data reported as of Friday. That’s just over 554,000 people. About 2.8 percent of Minnesotans — nearly 157,000 people — have received both […]

The post Daily COVID-19 update: 10 percent of Minnesotans have at least one vaccine dose appeared first on Albert Lea Tribune.