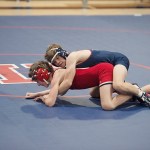 After facing some tough competition on Friday and Saturday last week, the Albert Lea wrestling team hosted Rochester John Marshall and Mankato West Tuesday night. The Tigers came out on top of both duals, dominating the Scarlets and only losing two matches 47-22. They took on a depleted Rockets team in the second dual and […]