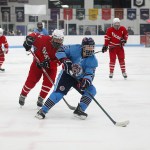 The Albert Lea boys’ hockey team looked to make it two victories in a row Tuesday night, hosting a winless Austin team.  The Tigers used a huge first-period performance and a hat trick by senior Blake Ulve to gain an insurmountable lead and dominate the Packers to a 7-1 win.  Albert Lea scored four unanswered […]

Covid-19 update: Record vaccination numbers over the weekend in Minnesota