Home News From fees to IDs, a deep dive into Walz budget 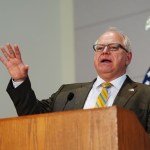 Lawmakers are diving deeper into the budget plan from Gov. Tim Walz this week. Items such as his proposed tax increases and additional school spending will dominate the debate between now and May.

The post From fees to IDs, a deep dive into Walz budget appeared first on Albert Lea Tribune.