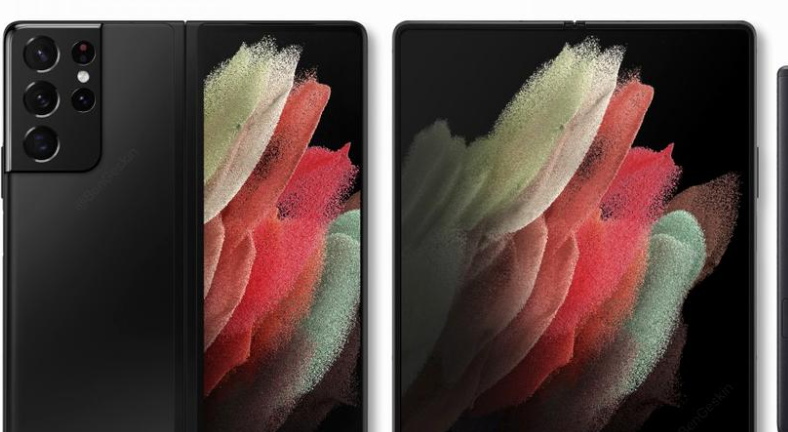 Galaxy Z Fold3 was a certainty since last year, Samsung aiming to significantly increase the category of folding devices in the next few years. But the third generation could be the one who will really demonstrate what these phones can do that can change their shape. After a first generation launched with small problems, which stimulated the imagination of developers and potential customers and a Galaxy Z Fold2 that corrected most of the problems of the original, Fold3 seems, according to 3D models based on descriptions, to be the device that will really try to capitalize the advantages of the foldable screen.

Ben Geskin, a well-known internet leaker, has published 3D renderings based on rumors so far about Samsung’s Galaxy Z Fold3. It does not seem at first sight to be very different from the Galaxy Z Fold2, but on closer inspection, some interesting things appear. First of all, the two screens, ie the exterior and the interior, are not cut in Infinity-O style, but have the camera under the screen. However, this can be seen through the screen, as when the black color is displayed on the OLED screens, the pixels in that area are turned off.

Then we have a camera system similar to the one on the Galaxy S21 series, with that “contour cut”, as Samsung calls it, which continues from the metal edge on the outside. In these images, it resembles the one on the S21 Ultra, even though in the past Fold models used less advanced systems on “standard” Galaxy S devices, with 12 megapixel sensors. Given the limited space in a foldable device, we probably won’t see 108 megapixel cameras on this model either.

Interestingly, it is rumored that the Galaxy Z Fold3 will use the S-Pen, the stylus that is now compatible with the Galaxy S21 Ultra. This means that the screen could be protected from a harder, scratch-resistant surface. Until now, Fold and Flip models used plastic protection above the screen. As in the case of the Galaxy S21 Ultra, however, the S-Pen will not be housed inside, but will be an external accessory.

However, it will improve the productivity capabilities of the device, as its format is now rather similar to a notebook.

Of course, these images are also based on unconfirmed information, so Samsung could deliver a product with several differences in the final version. However, in the last few years it has been shown that such “leaks” have been fairly well documented from reliable sources. We do not expect very big differences in the fall, when the Galaxy Z Fold3 is scheduled to be unveiled. Rumor has it that this model will replace the Galaxy Note21 offer.