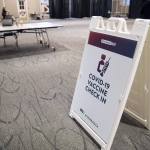 Thousands of Minnesotans age 65 and older who signed up for the state’s COVID-19 vaccination pilot program received erroneous messages Saturday — messages that raised doubts about upcoming appointments. The Minnesota Department of Health said a message intended for about 20 people, informing that small group about an issue with their upcoming appointments, was erroneously […]