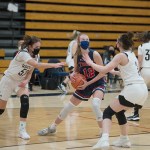 The Albert Lea girls’ basketball team got a couple of big performances from two key players in the home opener against Rochester John Marshall. Juniors Taya Jeffrey and Jordan Julveland each recorded double-doubles against the Rockets, but the Tigers ended up coming up just short in the long  run, 56-46. Albert Lea started the game […]