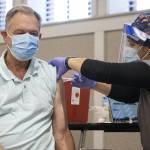 The post Less than 5% of Minnesotans have received 1 vaccine dose appeared first on Albert Lea Tribune.