Home News Are you putting garbage in the recycling bins? 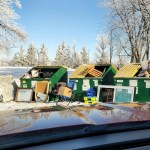 Freeborn County will soon begin being charged for people who are using recycling bins for garbage in the county under the new recycling contract with Waste Management recently approved by the Freeborn County Board of Commissioners.

The post Are you putting garbage in the recycling bins? appeared first on Albert Lea Tribune.