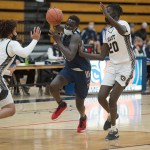 After a tough opening night against Northfield, the Albert Lea boys’ basketball team on Tuesday had the tough task of taking on Big Nine powerhouse, Mankato East.  The Cougars controlled the game from the opening whistle, never giving the Tigers a chance to claw back into the game. The Tigers lost their second consecutive game […]