Home News Editorial: Do your part to keep the COVID-19 numbers down 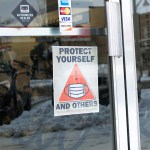 Freeborn County Public Health issued a press release over the weekend about how positive COVID-19 cases have continued to rise in Freeborn County over the last few weeks, while other counties in southeastern Minnesota are seeing numbers decline. While there are likely many factors that have contributed to that increase, the department stated some of […]

The post Editorial: Do your part to keep the COVID-19 numbers down appeared first on Albert Lea Tribune.