Home News Tigers shut out by Raiders in home opener 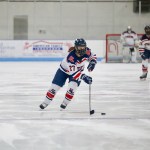 The Albert Lea girls’ hockey team hosted Northfield Saturday night in their first matchup of the 2021 season.  A three-goal second period by the Raiders put the Tigers in a hole they were unable to crawl out of, eventually falling 5-0.  The first period was relatively uneventful a majority of the time until with just […]

The post Tigers shut out by Raiders in home opener appeared first on Albert Lea Tribune.