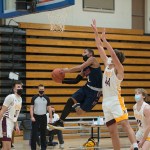 After a long pause of winter sports, the Albert Lea boys’ basketball team started its season Saturday night against a tough Northfield team.  Despite some impressive showings from two Tigers, the team was not able to overcome the strength and physicality of the Raiders, eventually falling 75-35.  The first half was a rough one for […]