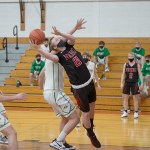 The NRHEG boys’ basketball team opened its season against Maple River Saturday night after having to move the game from Friday night due to inclement weather.  Despite a comeback after trailing by nearly 10 points in the first half, the Panthers were unable to hold onto a small second-half lead, falling to the Eagles 63-57.  […]