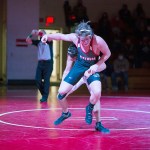 NEW RICHLAND — After moving the meet up to late afternoon in anticipation of inclement weather, the NRHEG wrestling team opened its season Thursday against Maple River. The early season woes got to the Panthers, staying in the dual against the Eagles until the end, but ended up costing them in the end, losing 42-33. […]