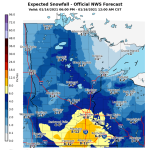 The Minnesota Department of Transportation announced westbound Interstate 90 will be closed west of Blue Earth at 10 p.m. Thursday and remain closed all night because of blizzard conditions and zero visibility. East and westbound traffic remains open in Albert Lea. Freeborn County is now in a blizzard warning through Friday afternoon along with western […]