Home News Court finds The Interchange in contempt of court, orders restaurant to pay fine of $3K per day 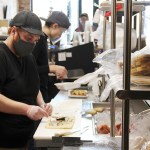 A Freeborn County District Court has found The Interchange of Albert Lea in contempt of court for violating the court’s temporary restraining order that required the establishment to temporarily close to indoor, on-premises dining in light of Gov. Tim Walz’s executive orders. The court ordered The Interchange to pay a fine of $3,000 per day […]

The post Court finds The Interchange in contempt of court, orders restaurant to pay fine of $3K per day appeared first on Albert Lea Tribune.