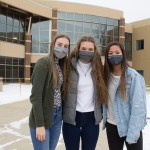 A group of Albert Lea High School students this fall started an organization to support their classmates and help erase the stigma around mental illness. Student Abigail Chalmers, 17, said she first emailed her adviser Gina Klennert in October about starting the club because she did not think the issue is talked about enough at […]