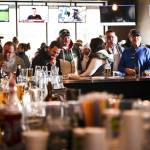 When Gov. Tim Walz extended his executive order barring inside dining and drinking at restaurants and bars nearly two weeks ago, dozens of those businesses publicly pledged to ignore the rules.