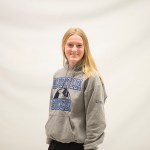 There are not many athletes in each graduating class that compete in three-sports throughout the school year. It’s almost unheard of for a student to compete in four sports in three seasons. However, that’s exactly what Albert Lea senior Mallory Luhring is planning to accomplish.