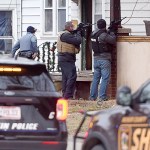 By Mike Stoll The Austin Police Department and Mower County Sheriff’s Office responded to a call of a stabbing incident that occurred at about 8:45 a.m. on Tuesday in the 800 block of Third Avenue Northwest in Austin. Two victims were seriously injured and transported to the hospital. “It appears a violent assault occurred,” Clennon […]