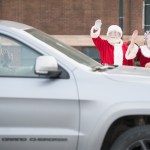 Children attending Thursday’s event were given candy canes and got to see live reindeer and wave to Santa and Mrs. Claus.