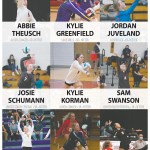 There was a wide range of games played between the seven volleyball teams in the Tribune’s coverage area. From 35 matches played by the Lake Mills Bulldogs down to just six matches played by the United South Central Rebels, the COVID-19 pandemic threw a wrench in the plans of many high school teams this fall. […]