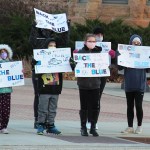 About two dozen people came out to the corner of Broadway and College Street late Sunday afternoon to show their support for local law enforcement after a standoff and shooting earlier in the day. Most carried signs, and they waved as people drove by honking their horns.

49ers will get another draft pick after Mayhew named Washington GM