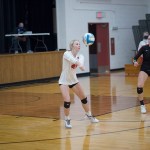 NEW RICHLAND — The NRHEG volleyball team took the court one last time when it hosted Bethlehem Academy Friday night before the new executive order kicked in, ending the fall sports season. The Panthers faced off against a tough Cardinals team and were unable to come up with a win in their final match, falling […]

Cygnus Expected to Load up The International Space Station