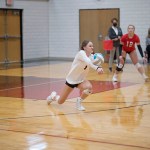 ALDEN — One night after losing its first game of the season, the Alden-Conger volleyball team was out for retribution while hosting Nicollet Friday night.  Despite a slow start in the first set, the Knights found their footing and cruised to a straight set win 25-17, 25-8, 25-10. Alden-Conger started the first set in a slump, […]