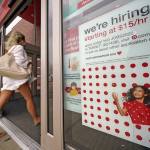 Public invited to street renaming in honor of Marion Ross