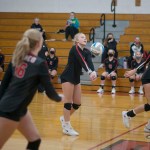 NEW RICHLAND — The NRHEG volleyball team hosted Waterville-Elysian-Morristown Tuesday night in what could prove to be its final match of the season. The Panthers were no match of the No. 2-ranked Buccaneers, who used a flurry of powerful kills to send the Panthers reeling.  Eventually the Buccaneers came out with the victory, beating the […]