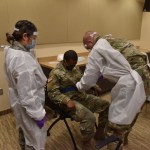 More than 200 soldiers and airmen from the Minnesota National Guard have been activated to support the state’s COVID-19 response efforts. This number is expected to increase to over 400 by the end of the week, according to a press release. The Guardsmen will be focused on three specific areas: supporting nasal swab community testing […]