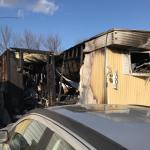 A home was destroyed and one person was injured in a fire on Gene Avenue Friday afternoon in Albert Lea. Albert Lea firefighters and police officers were dispatched at 1:22 p.m. Friday for a report of a structure fire on Gene Avenue, according to a press release. When authorities arrived, they found a fire at […]