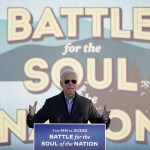 WASHINGTON — The fate of the United States presidency hung in the balance Wednesday as Democratic challenger Joe Biden picked up a win in Wisconsin while fighting President Donald Trump in other battleground states that could prove crucial in determining who wins the White House. Neither candidate cleared the 270 Electoral College votes needed to […]