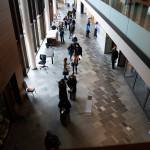 After months of presidential campaign attention, nonstop political advertising and weeks of early voting, the end is in sight: Election Day is Tuesday.