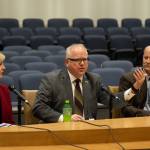 Minnesota legislative candidates are making a final campaign push in an election that will determine whether a divided government continues in the state.