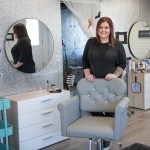 The post ‘It doesn’t feel like work when you’re having fun’ appeared first on Albert Lea Tribune.