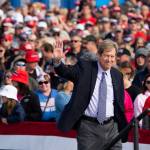 MINNEAPOLIS — Republican U.S. Senate candidate Jason Lewis of Minnesota underwent successful emergency surgery for a severe internal hernia on Monday, just eight days before Election Day, his campaign announced. The campaign said the condition could have been life-threatening if not treated quickly. An internal hernia is a bulge or protrusion of an organ — […]