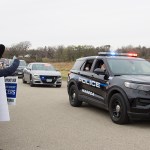 Albert Leans welcomed home Waseca Officer Arik Matson in a drive-thru celebration Saturday afternoon along Edgewater Drive in Edgewater Park. People were lined up throughout the park to wave and show their support as police officers and other first responders led Matson through the park.