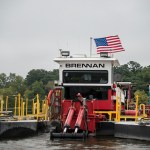 The Shell Rock River Watershed District administrator said Wednesday the district will reapply for state bonding funds next year to complete the Fountain Lake dredging after the project was not included in this year’s bill.

The post Watershed District to reapply for bonding funds for dredging next year appeared first on Albert Lea Tribune.