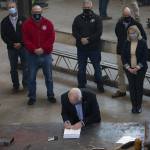 Gov. Tim Walz signed a massive public works bill into law Wednesday that he said will improve Minnesota’s infrastructure and ensure construction crews are kept busy as the economy digs out from a recession.