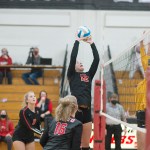 NEW RICHLAND — The NRHEG volleyball team came into its game against Hayfield Tuesday night looking to get on the winning path and record its first win of the season. Despite playing two close sets with the Vikings, the Panthers were unable to shake their early season struggles, falling to the Vikings 3-0. Early on […]