Home News Is that snow in the forecast? 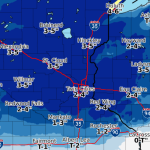 Though snow is expected to fall across most of the state on Tuesday, Albert Lea is expected to avoid major accumulation, according to the National Weather Service. The weather agency states most locations throughout the state could see several inches on grassy and untreated surfaces, though less accumulation — 2 inches or less — is […]

The post Is that snow in the forecast? appeared first on Albert Lea Tribune.