Home News What drove protesters in May unrest over George Floyd? 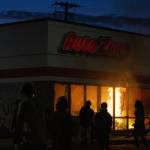 ST. PAUL — Before facing federal arson charges, the only other time McKenzy Ann DeGidio Dunn could recall appearing before a judge was three years ago, when she was legally adopted by a rural Pope County, Minnesota family at the age of 16. Her biological mother had died of brain cancer when she was 13. […]

The post What drove protesters in May unrest over George Floyd? appeared first on Albert Lea Tribune.