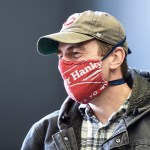 DFL Minnesota 1st Congressional District candidate Dan Feehan stopped in Austin on Friday to conduct a farm tour in the middle of harvest. Feehan said farm visits are something he has been trying to do consistently throughout his campaign.