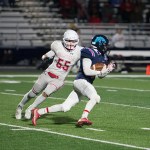 The Albert Lea football team hosted Austin Friday night in its first home game of the season. Offensively, the Tigers struggled to move the ball for much of the first half, which allowed the Packers to jump out to an early lead. The Tigers woes continued in the second half, as the Packers piled onto […]

Senate Report: Always feel free to reach out about what is important to you