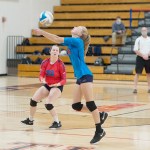 The Albert Lea volleyball team hosted its first match with fans allowed to be in attendance Monday night when Rochester Century came to town. Despite small comeback attempts in all three of the sets against the Panthers, the Tigers fell into holes that were too big to crawl out of, falling 3-0. The Tigers fell […]