Home News Knights off to a hot 2-0 start 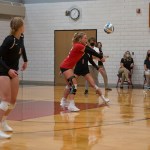 ALDEN — The Alden-Conger volleyball team kicked off its season Monday night in a match against the defending Valley Conference champions, Cleveland, and followed up with a home match against Loyola Catholic Tuesday. After finishing as runner-ups in last season’s conference standings, the Knights were out for redemption against the Clippers. While all the sets […]

The post Knights off to a hot 2-0 start appeared first on Albert Lea Tribune.