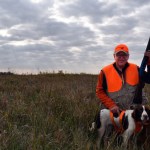 Gov. Tim Walz was out bright and early Sunday morning to enjoy the first weekend of pheasant hunting in Minnesota, according to a press release. The governor hunted with John Benson of Mankato and State Senator Nick Frentz on the private property of Blaine Phillips in southern Minnesota. The birds didn’t cooperate, though: neither Walz, […]