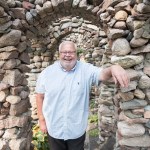 Man’s love of building with rocks began as child