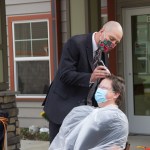 Residents at St. John’s Lutheran Community’s The Woodlands campus started out at the beginning of September with a goal to raise $100 for the Albert Lea Salvation Army. After only a week and a half of fundraising, they passed that goal, and the organization’s chaplain, Don Malinksy, offered to shave his head if they reached […]