Home News Race against the fall color clock: Over half of Minnesota already at or past peak 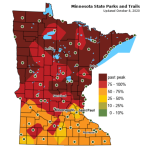 Ticktock. And no, we’re not talking about TikTok. We’re talking about fall colors, which have officially hit their peak across stretches of central and north-central Minnesota, according to the Minnesota Department of Natural Resources’ latest fall color map.

The post Race against the fall color clock: Over half of Minnesota already at or past peak appeared first on Albert Lea Tribune.